In episode 6, part 24, the Deer is seen standing outside of the window that Yukko is looking out from while standing in the hallway.

The Principal then tries to take it down in a fight that almost kills him. It is later shown in part 116 of volume 7 that he has not killed the deer, but has put it on his wall instead. 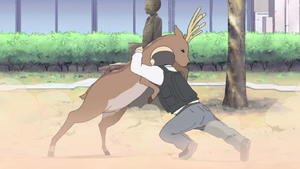 Retrieved from "https://nichijou.fandom.com/wiki/The_deer?oldid=24917"
Community content is available under CC-BY-SA unless otherwise noted.