Ogo was a prototype character from an early serialization of Nichijou. She was known as Ukai Mami (鵜飼真美) in the Nichijou Prototype.

Ogo class is 1-Q, which is the same class as Mio, Yuuko, Mai, Nano, and the majority of the cast.

Ogo has twin tails, with brown hair and black eyes. She makes brief appearances in the anime as a classmate of the main cast and also appears in the second ending, walking with her bike.

Ogo is known as calm person.

In the Nichijou Prototype, she was shown to be a member of the Drama Club along with Mio, being an elaborate screenplay writer.

In Laboratory lab they talked about Nakamura. 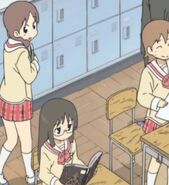 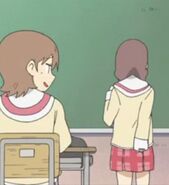 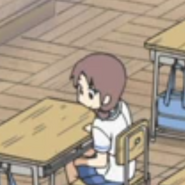 Add a photo to this gallery
Retrieved from "https://nichijou.fandom.com/wiki/Ogo?oldid=25415"
Community content is available under CC-BY-SA unless otherwise noted.