Nichijou X is a bundle of the Special Edition of Nichijou volume 10.

The evolution of each character's art. (Yuuko, Mio, Mai, Nano, Hakase, and Sakamoto)

Mio and Yukko play the kite from Ma-chan & Osamu. but it doesn't go well.

The Trio take a vacation into the hill. Yukko brings a Pocari drink and she's shed her drink by accident.

Mai still has a fever, which causes her to see things... differently.

Nakanojou and Tanaka build the aviary. and Nakanojou gets stuck in the aviary. Takasaki and Igo soccer members help them.

Izumi asks Makoto about her difference as a teacher.

Yukko and friends are walking to school. but a strong wind came and the wind Blows Yukko very far.

I can't stop my hiccups

Mio got a tumble. and something weird happens to Mio. Mio says herself is "Kita Veppu, Manabu". Yukko confused about Koi fish Mio talking about. Buddy appears in front of Yukko and Mio named it "Koi". Kita Veppu!

You only live twice

Time is waiting for you

Annaka met Itako on the street.

Arawi shows the result who's the most popular characters with fans vote. 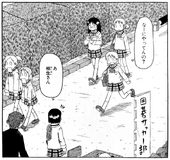 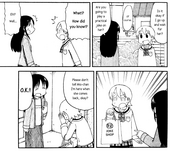 Add a photo to this gallery

Retrieved from "https://nichijou.fandom.com/wiki/Nichijou_Volume_X?oldid=25112"
Community content is available under CC-BY-SA unless otherwise noted.