Misato Tachibana is a high-school student who generally acts cold towards Koujirou. She is also closely affiliated to her Trio group which includes Fe-chan and Weboshii; two of her best friends.

She has a short length, peach-coloured hair, and brownish eyes. Also has small blushes on her cheeks. Usually, in the mention of Kojirou, her face blushes a deep red.

Misato is an extreme Tsundere whenever she interacts, or even hears a mere mention of Koujirou. This attitude also comes with an array of weaponry that she constantly summons seemingly from nowhere and fires at Koujirou. The weapons are loaded with blanks filled with flour, often resulting in him being colored entirely white. Her thoughts for Koujirou seem sensitive enough, that during any normal conversation, she somehow manages to usually trace everything back to him, even when he wasn't involved in it, leading her to wildly blurt out assumptions relating to future relationships, such as marriage and children, that nobody said.

She is also hot-tempered and caring towards her younger sister Mihoshi Tachibana whom she waits for and walks with home.

The three interact well together, as they share secrets with each other (such as crushes and relationships) and play mini-games together as well. Despite being Misato's friend, the girls are not safe from her rage whenever her tsundere attitude flares, and they often find themselves on the receiving end of her rage, whether they were teasing her or not.

Misato has a crush on Koujirou, but she never admits it. Due to her tsundere attitude towards him, Misato often leads to wild guesses and assumptions which almost cause Koujirou to realize her crush. In Episode 25, Misato was guiding Koujirou to the next class due to the fact that she broke Koujirou's glasses, which brought her crush to the attention to most people in school, especially Mio.

Misato and Yoshino are both quite close as friends considering they both attend the same Kendo class. They both get along well in a friendly competition during their Kendo class, as shown in an episode.

Misato's little sister. Despite being the younger sister, Mihoshi is the more emotionally-stable of the two, often poking fun at her sister's anger issues. 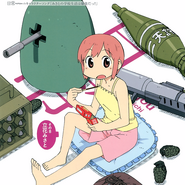 Add a photo to this gallery
Retrieved from "https://nichijou.fandom.com/wiki/Misato_Tachibana?oldid=25627"
Community content is available under CC-BY-SA unless otherwise noted.