Hajime Sakurai is the father of Izumi and Makoto Sakurai; and the author of the books "Steam", "Milk Snow" and "Relay Cropping". His debut is in Chapter 142 of the manga, so he does not appear in the anime adaptation. His most recent book, "Relay Cropping", seems to be particularly popular among his audience, since it is read not only by Mai but also Nano, who doesn't read books as frequently.

As shown in Chapter 142, Hajime Sakurai is sleepy all the time, even while talking with his editor. The editor (who is a relative of Weboshi), attributes this to him having lost his wife at a young age, and so dealing with both writing and housework at the same time. Hajime also seems to have gotten the idea of his book, "Relay Cropping", from Weboshi-san.

Being sleepy leaves Hajime's children, especially Izumi, having to look after him. As a result, practical housework (like cooking a meal for the family) usually cannot be done. He becomes absent-minded from his fatigue, as shown in the second-to-final panel in Chapter 142, where he attempts to ignite his lighter with a cigarette.

Role of "Relay Cropping" in the manga

"Relay Cropping" accompanies two minor gags in Chapters 152 and 157. In Chapter 152, Mai, who hasn't read the book yet, pretends not to care when Nano, having finished it, asks her whether she read it or not. In Chapter 157, Mai walks outside while at the same time she reads "Relay Cropping". Coincidentally, she also has to dodge the objects that are blown at her by the wind, only to notice that it's been raining by the time she finishes the book. The impact of this event is seen in Chapter 163, in which Mai has caught a cold - for the second time in her life - from the rain and she needs to rest at home.

Hajime is startled by the idea for his next book, "Relay Cropping" that is accidentally given by his editor.

Hajime's editor as she tries to persuade him to write his next book.

Sakurai-sensei (Izumi) taking her asleep father to a walk. Note Izumi's cloth and ladle, showing that she is also trying to cook the meal in the kitchen.

Nano as she is about to finish the book "Relay Cropping" (Chapter 152). 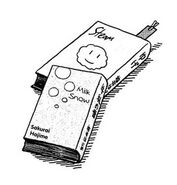 Hajime's two other works, "Steam" and "Milk Snow", are seen at the beginning of Chapter 142 as his "representative work".

Hajime tries to light the cigarette instead of the lighter without noticing it, while praising himself for "being reliable" at the same time.
Add a photo to this gallery
Retrieved from "https://nichijou.fandom.com/wiki/Hajime_Sakurai?oldid=16654"
Community content is available under CC-BY-SA unless otherwise noted.